Miss Bourgeois in the Pine Barrens
by PERDITA BUCHAN

She was short, with frizzy hair, nicotine stained fingers, thick glasses and a leg brace from childhood polio. She wore mud colored tweed suits and always stood with one foot on the rung of her chair, holding grimly to the back of it as she talked. She was not the kind of person to control a room full of seventh grade girls. Miss Bourgeois. Seventh grade Algebra. A girls school in suburban Philadelphia. I wish I could say that I was moved by even the slightest compassion for someone so uncomfortable in her role, but of course I wasn't. I treated her with the same contempt as everyone else did.

Although we spent much of our seventh grade year making her life miserable, when we returned the next year, so did she. Her hair was still bushy, her startled eyes still magnified by the thick lenses. She still wore the tweed suits and lace up oxfords, but now she taught Biology. I was marginally more interested in Biology than in Algebra. I liked looking at slides and I liked making drawings. I let up on Miss Bourgeois since she was no longer the incarnation of a subject I hated. When she announced her plan for a science project, I was receptive.
"Girls," she said, "I want to take any of you who are interested on a field trip to the New Jersey Pine Barrens."
I knew something about the Pine Barrens. We drove through them every summer on our way to my grandfather's house on the New Jersey shore. I'd heard the stories about the Pineys who lived there. Legend proclaimed them freakish, wild, inbred, suspicious of outsiders. It was a spooky place but interesting. I raised my hand.
And so it was that five of us, notebooks and brown bag lunches in hand, met in the school parking lot that bright spring morning, climbed into Miss Bourgeois' Ford Fairlane station wagon and headed for the Pines.
I almost held my breath when we left the highway on a road that meandered through forests and past blue lakes. We were in wild territory now and the Pineys could be lying in wait. The sun was fierce. Heat rippled up from the white sand roads.
Parking the car in a clearing, we struck off on paths into swamps and through stands of dwarf pine and oak taller only than Miss Bourgeois herself. We saw wild orchids and crouched in springy sphagnum moss to peer at the glistening lip of a pitcher plant or hear the frantic buzzing of a fly caught in a Venus Fly Trap. The day droned, it shimmered, it sang with heat. We made our way around marshes, along rivers of tea colored cypress water, finally reaching the edge of a lake where we rolled up our jeans and waded, splashing water on heated cheeks.
And as we hiked, Miss Bourgeois changed. She knew every plant and tree, every tump and hillock and body of water. She explained the cycles of Pine Barrens commerce: cranberries, blueberries, pine cones and holly, sphagnum moss. I was particularly fascinated when she explained that, thanks to its absorbent and antiseptic qualities, the moss had been used to pack wounds during the First World War. The place unfolded, with Miss Bourgeois limping at its center in jeans and a baggy white shirt, the genius of this strange and lonely landscape. The awkwardness was gone. She belonged here, like the stunted pines and blackjack oaks, the silvery moss, the ferns. Like them, she was a survivor.
As the afternoon sun was lowering, we climbed, exhausted, into the car. That was when she told us she was going to take us to see a friend. We looked at each other. What kind of friend could Miss Bourgeois have? A Piney? We exchanged quizzical glances as Miss Bourgeois, scrunched down behind the wheel, drove on.
The sugar sand road wound deep into the woods, ending in a clearing beside a one story white house. Sun glared on the house's tin roof. A fan whirred. A woman came to the door. The elision of memory leaves only a sensation of dimness, of coming out of bright sunlight into a darkness filled with a deep mechanical thrumming, and then we were in the small room, windows on three sides, filled by the machine, a silver cylinder like the body of a tiny tank truck. As we filed in, there seemed barely room for us between the iron lung and the wall. The boy in the iron lung turned his head, with his blond crew cut and startling blue eyes, he looked like a teenage movie star except that his body was held motionless in that metal prison. He was probably eighteen.
"I brought some friends to meet you," Miss Bourgeois said. She must have used his name but I don't remember it.
"Hi," he said and smiled.
"Hi," we chorused awkwardly in response.
"We've been all around Pasadena," Miss Bourgeois said.
"I used to hunt in there," the boy said.
His eyes flicked over us as though we weren't there.
"It's really beautiful," someone volunteered.
I was mute.
"Yes," he said, "you get a lot of deer in those woods."

I don't remember whether anything more was said. When we filed out, murmuring goodbye, he was still smiling. But there was something in the smile I couldn't read.
"Nice of you to come," he said. I heard the edge in his voice and looked down, feeling my cheeks flush with shame.
We were silent in the car. This didn't seem to bother Miss Bourgeois. She drove on matter of factly and without comment. She had made her point and we were silenced, jostled together in the back of the Ford Fairlane. At least that's how I see it now.
It seems that a lot of important things were hovering at the edge of my consciousness that late spring day: the need to protect wild places, the need to see beyond one's own narrow experience, and, perhaps the heaviest lesson for an adolescent, that the physical body can betray the sprit it houses.
So powerful were those lessons, so hauntingly beautiful the landscape, so surprising the guide, that the years have never faded that long ago day in the Pines. It remains acutely clear while other more obviously important days – graduations, weddings, holidays – blur.

I never knew what happened to Miss Bourgeois, she left the school before I did, or to the boy in the iron lung. And though I've returned to the Pine Barrens many times in recent years, I have no idea how to find the house in the clearing. I do know that the fragile ecosystem of this singular place is sorely threatened and must be preserved. And everywhere in that wild landscape – on a causeway over the cranberry bogs under a wide, empty spring sky, along the sand roads in autumn – I can still feel the stubborn spirit of a gifted teacher.

Granddaughter of "The Pinelands Witch", daughter of the self-styled Wizard of the Pines and with powers of her own, eleven-year old Florilla Munion finds herself abandoned deep in the New Jersey Pinelands. Rescued by the itinerant Dr. Peace, she is taken to Benderville, a model mill town in the heart of the Pines owned by the doctor's old friend, the eccentric, progressive Benjamin Bender. There she grows up. But Benderville is only the beginning of Florilla's journey. Her abusive father who knows her powers would benefit his act is a constant threat. She falls in love with an English botanist but is separated from him by circumstance. The story wends its way from the New Jersey Pinelands to the mills of Massachusetts as Florilla searrches for her place in the world and her lost love. Taking place in  the years from 1848 to 1857, the novel is also a reflection on a time when various reformers and philosophers speculated on the best ways to organize life and work. 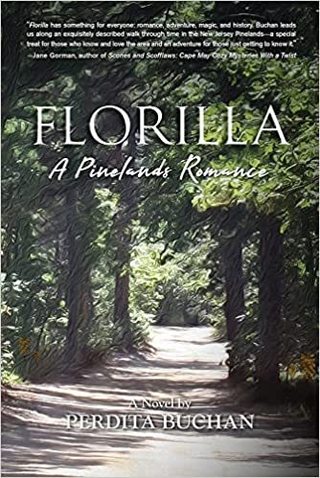 The great carousel carvers of the last century were mainly immigrants - German, Italian, Russian - who brought their skills as cabinet makers or carvers of religious icons to America. In the beautiful animals they created for the "golden age" of the carousel, they achieved a synthesis of the old world and the new, past and present.

"Overall, The Carousel Carver is a beautiful little book about carving a niche for oneself in the world and finding love in expected places. Recommended." 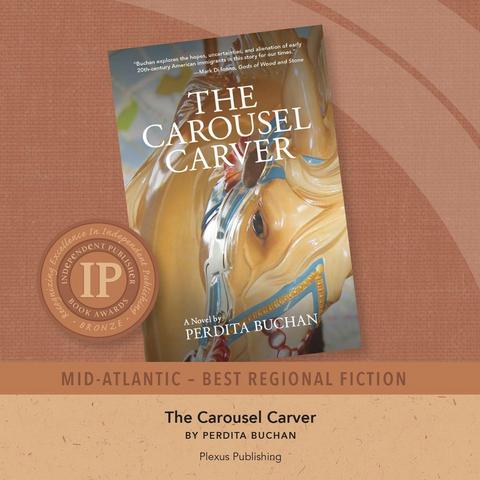 "A fact packed book that could be a textbook for a history class yet reads like a novel."

"Abrupt departures, flights through time, the transitory and the enduring all have a part to play in this imaginative entertainment." The Philadelphia Inquirer